NFTs and Copyright: An Uncomfortable Conjunction? 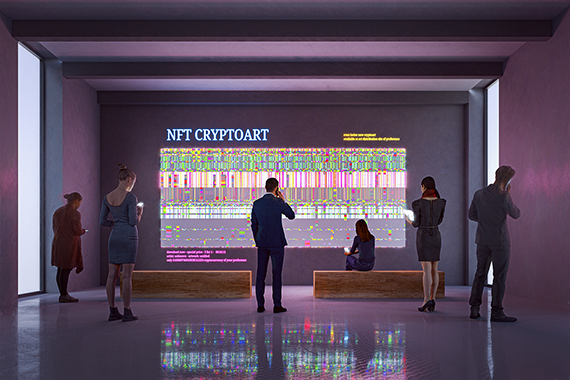 On April 15th, Hollywood writer and director Kevin Smith announced that he was putting an unreleased film of his, “Killroy was Here” up for sale via NFT (i.e. ‘Non-Fungible Token’ – more about that below). He’s auctioning this work off ‘lock, stock and barrel’ – that is, all the digital files of which the film is comprised, and without retaining any copies or backups. He’s certainly aware of what he is doing – “What you get is the whole movie, with the hard-drive files, in the real world. The completed ‘Killroy’ movie is the NFT. You’re a distributor, my friend. Or you can wheel and deal. They can take it to Netflix. Or someone can buy it and just put it on their shelf and never show it again. That’s a possibility.” (Emphasis added.) However: Unless I am reading the redoubtable Mr. Smith wrong, nowhere has he said that he is transferring his copyright in this film as part of this deal.  And that means that the “wheeling and dealing” is with the film as is – no material changes, no sequels.  That is, it really IS the “whole movie,” but only the movie…

Kevin Smith’s is among the most recent in a series of high-profile auctions involving NFTs and creative works.  What really catches my eye in these highly publicized and big dollar auctions was the question I think most of the articles about them skip over (or don’t deal with at all): What were the rights included? The traditional rules of copyright assignment and transfer (a topic we recently posted about), which have been encoded into law and practiced since the beginning of the Republic, still work and nothing in these digital arrangements changes anything in those. Right?

But let’s back up a bit and describe in more detail what it is we are talking about.

A technological innovation created a few years ago, NFT’s may be briefly (and functionally) described thus: “An NFT is an asset verified using blockchain technology, in which a network of computers records transactions and gives buyers proof of authenticity and ownership. The current boom is mostly for digital assets, including images, GIFs, songs or videos. Most importantly, NFTs make digital artworks unique, and therefore sellable.” (Josie Thaddeus-Johns, writing in the New York Times.) Signed lithographs also come to mind: back when Picasso or Dali were signing their lithographs and putting a number on each one – to make them each unique (although they always were still copies). It is literally true that, in that signing and number process, the artists turned copies into originals —which is what NFTs, in their way, do now.

Intriguingly, our fellow blogger Bill Rosenblatt recently compared NFTs to a (now, decades’ old) concept, DRM (originally, ‘Digital Rights Management’ but here, more specifically the forms of “digital locks for digital files” used to either permit or deny access to the files, based on certain conditions, such as payment). It’s a provocative angle, and it may indeed have a useful future (if intrinsic costs can be controlled for. The idea is that, since the distributed digital ledger carries its own chain of ownership information, no one* in the process is able to pull a fast one.

*I don’t mean “zero entities ever” – I mean, “hardly anyone, to a very high standard of measurement.” Nothing technological is perfect, if only because nothing human is perfect.

What makes this whole issue news is perhaps not simply that NFTs are sold to individuals by the creators of digital works, but that they are commanding very high prices indeed.

Now, outside of a small but enthusiastic cadre of crypto-enthusiasts (and hopeful high-dollar value creators with some goods to sell), many of us are struggling to see much social utility in the advent of NFTs.

Encryption comes into the process as digital files are notoriously easy to copy, and much of the colossus known as the Internet is based on that very premise of perfect, limitless, copyability. But a digital file that always ‘knew’ where it had originated from, and where it had been in the meantime? That’s news  — and I think over the long term it’s an attribute that might be remain useful. In other words, using their “encoded chain of title” or distributed digital ledger encoding, NFTs “… are designed to give you something that can’t be copied: ownership of the work (though the artist can still retain the copyright and reproduction rights, just like with physical artwork). To put it in terms of physical art collecting: anyone can buy a Monet print. But only one person can own the original.” (Mitchell Clark, writing in The Verge.)

But please don’t get me wrong: We live in the 21st century, and I have no beef with anyone who can successfully make money out of nothing but electricity, encryption, computing power and consumer attention —assuming they can accomplish that without wrecking any other part of the world. One mantra of digital capitalism might be restated thus: If your activities are legitimate, go ahead and make your way in the market, and let the chips (or tokens) fall where they may.

I hazard the guess that, even in a big dollar NFT sale, copyright in the work is not commonly —and explicitly —assigned, and those rights therefore will remain with the creator. If that is the case, then it follows that the copyright – meaning, among other things, the right to make and authorize others to make copies – can’t later be sold further down the line by the buyer of the NFT. And that’s because you can’t (legitimately) sell what you never acquired in the first place . . . which might eventually come as a surprise to someone who shelled out a few million bucks for one of these things and still didn’t get the rights. (I’d log on to a Pay-Per-View to witness that moment live!) If NFT creative sales become common, copyright assignments associated with them may become common also. This is where a very old bureaucratic process would be helpful creating a very new market otherwise founded (it would appear) entirely on technology.

From the perspective of more traditional applications of copyright, it might be useful to realize that these NFT transactions, at least based on public information to date, are less like outright copyright transfers and more like narrow- but-exclusive licenses.  As the supposed “buyer,” what you are getting is an exclusive right to access and look at the NFT while you hold the license plus a right to transfer that license (for money) to someone else. There are definitely assets and a market there but they may not be exactly those which occur to buyers at first glance.

Before wrapping this up, I want to put in a plug for a solid two-part series on this very topic —on a much more detailed level—over on the (reliably excellent; I recommend my fellow copyright mavens all subscribe to it) Kluwer Copyright Blog under the title, “The Rise of Non-Fungible Tokens (NFTs) and the Role of Copyright Law.” (Parts I and II).

A final word re: Mr. Kevin Smith and the NFTing of his film: It’s a bold move, and I hope he achieves his purposes with it. But shelve it such that it never sees the light of day? Yikes. Double-Yikes, Batman. Shades of the Return of the Hidden Wu-Tang Clan album! And a question out of left field for the Writer/Director: Would the winner of this auction have the legal right to take the words “A film by Kevin Smith” off of it? Just curious, as the saying goes.