I was once offered a genuinely unique archive comprised of tens of thousands of hours of educationally-focused video footage from a world-leading broadcaster and spanning 50 years for just £1.

Why was I presented with this seemingly ‘too-good-to-be-true’ offer? Because despite the archive being potentially extremely valuable (many would argue invaluable), its net worth to the owner was effectively zero, due to one crucial detail — lack of metadata.

metadata
/ˈmɛtədeɪtə/
noun
1. a set of data that describes and gives information about other data*.
(*The data being described can also be referred to as content)

In this instance, the video footage content lacked sufficient data to describe the subject matter contained within the footage (the actual contents), the rights associated with it, the products it touched (usage), age, version history, etc. This sort of information typifies the metadata that any organization needs in order to leverage their existing content in a meaningful way.

“What’s the problem? Now that we know what we need to store as metadata against the content, we can just go back and add it, right?”

The ultimate answer to that question is driven by establishing the return on investment; retrospectively adding the required metadata will involve effort (and therefore a cost), be it manual, assisted or even fully-automated, and the size of the effort will be impacted by many factors.

The video archive spanned 50 years, so even establishing some basic (by modern standards) metadata may well have proven too hard and therefore too expensive to generate any kind of ROI, hence the £1 offer.

Dr. Alexander Wissner-Gross, an award-winning computer scientist, inventor, and author, defined intelligence as “a force to maximize future freedom of action.” His point was that the more intelligence something has, the more likely it is to succeed via the availability of choice.

Well-described content — content that might be referred to as ‘intelligent,’ ‘semantically-enriched,’ or ‘smart’ — maximizes the potential to exploit future opportunities, known and unknown, and therefore maximizes the potential ROI. Therefore, it makes sense that the earlier in its lifecycle that a piece of content is embedded with intelligence via metadata, the greater the freedom of action that content will have in the future. 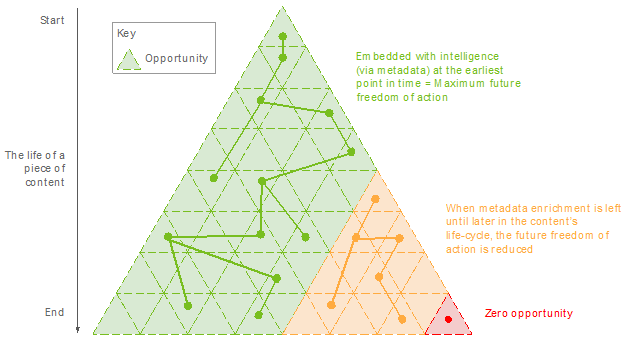 Fig. 1. Content’s ability to exploit future opportunities is maximized by embedding intelligent metadata at the earliest opportunity (typically at the point of content creation).

For the past few years, I’ve worked with dozens of companies around the world to help them with their strategic content workflow and knowledge management initiatives. I encourage my clients to begin by defining the Minimal Viable Metadata, or MVM, for their organization’s content. This is the set of bare minimum information used to describe each element of content. The MVM will most likely reflect a mix of external factors, such as the market verticals in which the organization operates, compliance requirements (e.g., industry standards, government policy), as well as internal factors, such as the organization’s content strategy, subject matter expertise, IT systems, etc. Once established, the MVM will allow an organization to unlock the potential of their content, both internally and externally.

In a recent client engagement, I was reminded of the £1 offer I received years ago. In the case of this new client, the lack of video metadata resulted in production slow-downs, process bottlenecks, and single points-of-failure, all of which was holding the organization back from fully exploiting the value of its extensive video content. We quickly established an MVM model and got to work. I analyzed all the content and data associated with the footage and quickly saw the potential quantifiable benefits by taking the subtitle script file (there was one present for every video), mining it for predetermined terms, and then indexing the results against each video asset.

My client now had the potential power to turn tens of thousands of hours of video footage into a fully searchable resource for the entire organization to utilize, whereas previously, the knowledge about what was contained within the videos was locked away in the brains of two people. With an MVM in place, the client could accelerate production timelines, reduce and eliminate bottlenecks, and find new ways to drive revenue and cut costs associated with their video content.