LA Referencia contains over 1.2 million records of open access content from nine countries in Latin America: Argentina, Brazil, Chile, Colombia, Costa Rica, Ecuador, El Salvador, Mexico, and Peru. The records provide access to the peer-reviewed journal articles and theses and dissertations in these countries across all research disciplines. This effort integrates the research outputs of the two regions and will significantly raise the visibility of Latin American publications outside the region.

OpenAIRE and LA Referencia are two of the largest and most well-developed regional repository networks in the world. Together the two regions represent about half of the world’s open access repositories and a large portion of the world’s research output. Both regions are also well progressed in terms of open access, with strong open access policy environments and comprehensive repository coverage.

Regional and national networks, such as OpenAIRE and LA Referencia, play a critical role in supporting open access because they create communities of practice, define standards, and maintain services that reflect the needs of their regions. Yet, the research enterprise is increasingly global, and regional networks must also give users a comprehensive international view. Sharing metadata allows networks to focus on their local communities, while still representing a fuller picture of research outputs. 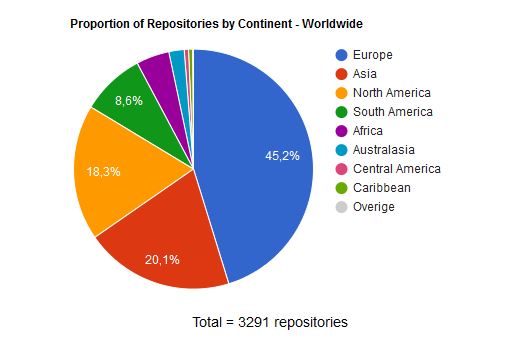 This activity builds on earlier collaborative efforts of the two networks, in partnership with COAR, to adopt common guidelines, technology transfer, and capacity building that helps to enable cost efficiencies across networks and ensure more seamless discovery and integration of content. COAR, OpenAIRE and LA Referencia have also been working with other regions to promote greater alignment and are working towards greater connectivity of research across the world.
Via OpenAire.